Finally accomplish your goals: With the help of Sir Isaac Newton and Dory from Finding Nemo 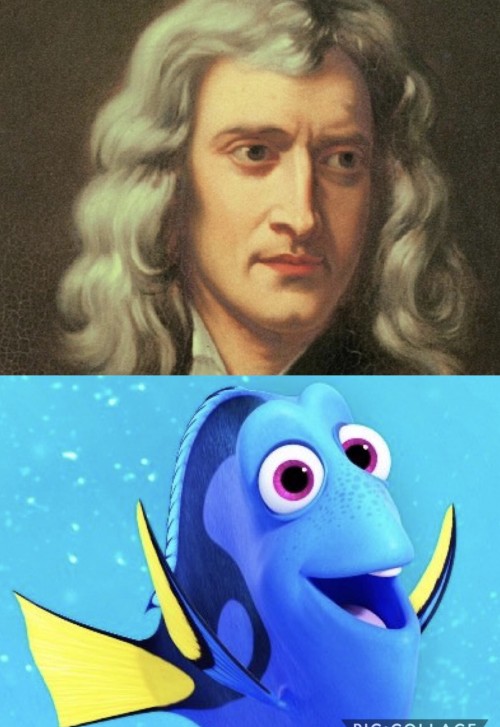 Sometimes accomplishing goals is hard. Sometimes it seems nearly impossible. We all get stuck asking the question of WHY can’t I do this? WHY can’t I accomplish what I set out to? Luckily this really cool guy Sir Isaac Newton realized some awesome and relatable things in the physics world that explained a lot of how the world works… He already did the hard part, now you can use his findings to finally figure out what’s holding you back from accomplishing your goals.


His first three laws and how they pertain to you:


1. An object at rest stays at rest and an object in motion stays in motion with the same speed and in the same direction unless acted on by an outside force.

Why the heck does this matter: Think of how hard it is to start something new. Why you need to start on a Monday rather than immediately. Why once you start you get addicted and you don’t want to stop… until something derails you, an outside force. Everyone has the story of being on their way to accomplishing their goal until WAM BAM something comes out of nowhere and takes you out. This will inevitably happen…but if you understand physics you know that you can start the motion again. Sometimes you need to create your own force to get back on the wagon. Remember that when you fall off…its just physics.

What the what? This one is fun! Broken down to how we actually speak, it’s basically saying your acceleration or how fast you move is directly related to what’s pushing you from behind (your force...and may I say we all are a force when we set a goal for ourselves,) and what’s stopping you from moving is “mass.” How I see this, it’s what is weighing YOU down. You can accelerate and demolish your goals but only if you’re not holding on to unwanted weight…and I’m not talking about body fat. I’m talking about all the reasons you didn’t accomplish your goals in the first place. Is it personal, family, business, health related? Whatever it is, it can create so much push back that you never move forward. Remember this when you’re not making progress and check all the other areas of your life…not just your carb count.

3. For every action, there is an equal and opposite reaction.

The much simpler way to explain this: Forces happen from interactions.

Let’s break this down into real life...then we can break it down into how it affects our mindset and goals.

A fish example because were in Florida and lots of us like fish:

When a fish swims through the water its fins push water backwards. If this law didn’t exist the fish would stay in one place and the water would accelerate backwards. This does not happen because the water has an opposite force on the swimming fish and the fish is able to “push off” the backwards force of the water.

So lets figure out why sometimes we’re the fish accelerating water and staying in one place… I know you have all felt like this at some point.

We either need an opposite force to propel us forward or the other force acting on us is larger than us…or MAYBE were not supplying any force and just expecting things to happen. Forces can be either contact interactions or action at a distance interactions. In science world, the first is friction, tension, and applied forces and the second is gravitational, electrical, and magnetic forces. Basically, forces can come from anywhere and there is PLENTY of opposite reactions for you to propel off of…whether they are right in your face and you’re able to touch them, or they are unseen (you can’t see gravity except when somethings falls out the sky and hits you on the head.)

If you’re serious about accomplishing your goals you need to find what propels you. This is your WHY. When things get hard and you’re ready to quit your WHY will always be there to push off of and create your acceleration. Now what if your opposing force is larger than the force you’re putting on it… well you then become a bug hitting a windshield. Which one has a greater force? Bye bye bug! This happens when you choose a WHY that’s way bigger than the effort you’re willing to put in. It’s impossible to choose a large goal for yourself if you’re not ready to change your ways and get the work done. Big goals take effort and change, find a WHY that matches what you’re willing to put in... and just keep swimming.

Thankfully for you, Newton only had 3 laws of motion…so I’m done with my spiel. I hope however your take away from this is there are so many things in life that can propel us to accomplishing what we set out to, and there are things that can derail and hinder us that can be overcome. The only way to move forward is to choose a WHY that you’re actually willing to put the work and effort in for.

The next time you write down your goals for this year or years to come, put your WHY and what steps and/or changes you’ll have to make in your life to get there. Then, sit back and ask yourself; “Am I actually willing to make the changes and put in the work to get there?”

Remember, with finding your force and focused change you will be able to propel yourself forward and accomplish anything…its science.